Is Your Hay Fever Acting Up? 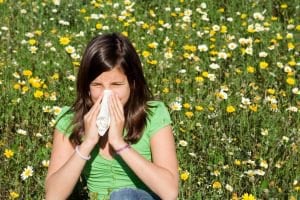 It's nearing the end of September, and the arrival of fall often means an increase in allergy symptoms for those who suffer from "hay fever." We've spoken about it before, but seasonal allergic rhinitis (hay fever) is something that shouldn't be left alone for too long. If you don't suffer from it, it most likely doesn't concern you that much, but you most likely know someone who does battle it every fall. With the increased amount of ragweed pollen and other allergens in the Texas air this time of year, symptoms can flare up and people can have a hard time getting through each day without coughing, sneezing, and constantly wiping their eyes.… END_OF_DOCUMENT_TOKEN_TO_BE_REPLACED

While medicine and medical treatment have come a long way in the past century, there are still ear, nose, and throat conditions that continue to persist. One of these conditions is mastoiditis, which while rare, can still pop up occasionally. It is usually found in children with ear infections that have been left untreated. The condition is known as mastoiditis due to the mastoid bone – the prominent bone behind the ear – developing an infection from untreated ear conditions. The doctors at our Downtown Houston ENT clinic can diagnose your child's condition and provide the necessary treatment to cure it.… END_OF_DOCUMENT_TOKEN_TO_BE_REPLACED

There are several public and private colleges and universities in the Houston area, and at each one, students look forward to spring break every year. Some schools have already had their break, while others will begin their week-long vacation in the next couple of days. If you're suffering from sinusitis and you're afraid that traveling for spring break is only going to make it worse, visit our Downtown Houston ENT clinic right away.… END_OF_DOCUMENT_TOKEN_TO_BE_REPLACED

Does Your Child Have Allergic Rhinitis?

With children around the country heading back to school this week or next, parents are bracing themselves for the first round of cold and flu symptoms that several kids will come home with after a few days in class. Germs, allergens, and bacteria can all contribute to a child getting sick, but if you've noticed that your child often displays symptoms such as nasal itching, watery nasal discharge, or trouble breathing through their nose, they could have allergic rhinitis. The doctors at our Downtown Houston ENT clinic can properly diagnose and treat your child's rhinitis.… END_OF_DOCUMENT_TOKEN_TO_BE_REPLACED

Ear Infection Treatment for Both Young and Old

Otitis media, or middle ear infection, is more common in young children, but adults can also suffer from it. The infection is caused by the same issue, no matter the age of the patient, and the team at Houston ENT & Allergy can effectively treat otitis media. Our office in Downtown Houston is equipped with a knowledgeable and compassionate staff that will listen to your concerns and provide exceptional care for your ears, nose, and throat.… END_OF_DOCUMENT_TOKEN_TO_BE_REPLACED

Visit Us in Downtown Houston for Fall Allergy Treatment

Allergies are a serious matter for any person, and if you're someone that notices the differences in your reactions as the seasons change, it's important to know how to combat your allergies year-round. For those that notice the biggest increase in allergic reactions during the fall, they most likely have ragweed to thank for that. At our Downtown Houston ENT clinic, we provide allergy treatment for several patients each fall that are suffering due to ragweed pollen.… END_OF_DOCUMENT_TOKEN_TO_BE_REPLACED

Downtown Houston is a great place to be - especially during the summertime - and with lots to do, you can spend several days touring the area. You can take in an Astros game or a Dynamo match, or find a cool place for a swim to beat the Texas heat. If you've been swimming in the past few days and have noticed that there still seems to be water in your ears, it could be necessary to visit an ear, nose, and throat clinic. Houston ENT & Allergy has a location right in the heart of downtown, and can treat your swimmer's ear this summer.… END_OF_DOCUMENT_TOKEN_TO_BE_REPLACED